Posted by Cheri Strange on October 9, 2019
Leave a Comment 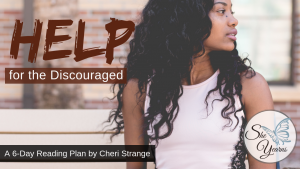 The first days are so painful sometimes but I know days five and six are coming. God does not leave us alone to climb out of our dungeons. He helps us in conquering them. Today’s message not difficult to write because I am so familiar with it. For me, the encouragement and strength as essential–the very purposes we are gathered. I pray God’s Word does not return void, penetrating your own heart and mind. He is about conquering your dungeon.

I have said these things to you, that in me you may have peace. In the world, you will have tribulation. But take heart; I have overcome the world.”

No, in all these things we are more than conquerors through him who loved us.

Charles Spurgeon was a renowned pastor in London during the 1800s. He was not popular because he was soft on truth, nor did he pander to the critical base. It was his giftedness in preaching the Word. Spurgeon was able to present a truth, draw you in where you felt it is written for your particular need, and sense Divine inspiration.

This man, like our John the Baptist, was full of conviction, confident in his calling, with the ability to deliver faithfully. Spurgeon developed such powerful sermons that even translated in other languages across continents, just reading them could be used by God to bring people to salvation.

At age twenty-two, Spurgeon was newly married with two babies and already had what we would call a tremendous following. So much so that he and his congregation decided to rent the Surrey Garden Music Hall to accommodate the crowds they were anticipating. This music hall was built with a bottom floor and balconies where people sat facing the stage. Quarters would be close in order to hear the speaker without sound equipment. For an evening message, 12,000 people would attend. Another 10,000 would stand outside leaning in straining to hear something.

Such ministry success, however, brings out the worst in some people. A few minutes after six p.m. someone yelled “Fire! The balconies are giving way!” With that announcement came mass hysteria. People were still coming into the theater which blocked the exits. A balcony, indeed, gave way from the weight, but there was no fire. It had been a lie–intentionally told to create the hysteria and mass commotion. What resulted were seven deaths: people trampled by those trying to escape; and twenty-nine seriously injured. Spurgeon was helpless and had to be carried out on the verge of consciousness. He didn’t believe he would ever recover from the event.

Yes. In this world, you and I will have trouble.

But we know this tragedy does not mark the end of an era for Spurgeon for the same reason your difficult situations, tragedies, or deep discouragements will not mark the end for you. His story is not over and neither is yours!

Even before we know how the story ends we can make progress in our own realities.