How To Adopt Without Ruining Your Family Day 2

Posted by Cheri Strange on November 18, 2016
Leave a Comment

Category  :  How to Adopt Without Ruining Your Family
Tags  :  adoption, family, YouVersion 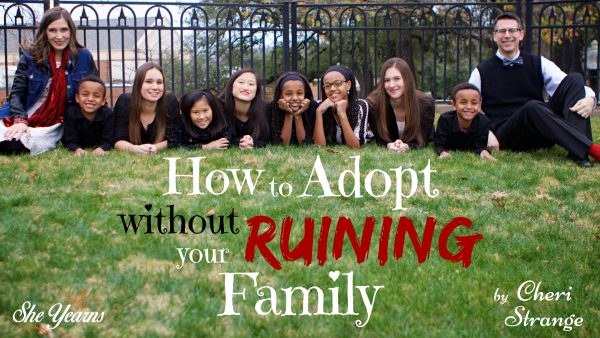 How To Adopt Without Ruining Your Family 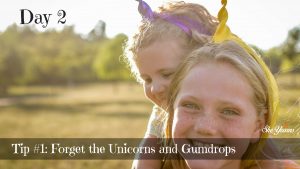 There currently seems to be a romanticism with adoption. Today, adopting is portrayed as how real Christians respond to the Gospel. And if you don’t sign up–you don’t love Jesus enough. Often when I speak at conferences, people tell me how they, too, have thought about adopting someday. It’s as if they are enamored with the idea, like getting a free puppy at the shelter. That’s all well and good until it starts chewing up the couch and using your carpet for a bathroom.

Recognize the path of adoption is not filled with unicorns and gumdrops. It’s war. Spiritual war. Adoption is an endeavor God holds near and dear to His heart. That means the enemy stands in defiance against the very thing God is committed to restore—using you and your family. Don’t think for a minute you will escape unscathed without some bruises or battle scars.

This charge I entrust to you, Timothy, my child, in accordance with the prophecies previously made about you, that by them you may wage the good warfare, 1 Timothy 1:18

Fight the good fight of the faith. Take hold of the eternal life to which you were called and about which you made the good confession in the presence of many witnesses. 1 Timothy 6:12

Share in suffering as a good soldier of Christ Jesus. No soldier gets entangled in civilian pursuits, since his aim is to please the one who enlisted him. 2 Timothy 2:3-4

With eight kids, invariably I’m confronted with unicorn-gazers. They offer accolades including, “Your family is such an inspiration,” or, “Your children are so well-behaved,” or a common misnomer with those who adopt, “You must just love children!”  I respond with grace but my thoughts are more candid: “You have NO IDEA! And NO. In fact, I DON’T even think I LIKE KIDS- but I LOVE JESUS. I’m barely holding it together physically and emotionally while you gawk at the unicorns in their beauty and smell those gumdrops.”

What people on the outside of adoption peering in don’t see are the fierce battles daily taking place. Recently, my single and childless young friend posted a picture of herself carrying someone’s baby on her bosom. The caption read, “The only way to shop!” Well, any mom knows that’s an oxymoron. My sweet friend thinks it’s adorable in the moment, but doesn’t HAVE A CLUE what she’s talking about!

If you are considering adoption, may I suggest: Lose the enchantment. Instead, prepare for war.

If you are already involved and somewhat discouraged from a lack of gumdrops and unicorns, I’m sorry it’s not what you’d hoped. It’s time to take off the party shoes and strap on combat boots.